Due to the ongoing (on 20 august 2019) rescue operation in the Wielka Śnieżna Cave in the Tatra mountains we decided to write about cave communications.

Rocks and soil attenuate radio signals well. Despite of this some means of communications in caves and mines are needed.

The attenuation rises with frequency. Normal VHF communications gear can’t be used, sometimes the distance can deteriorate to meters, depending on the geology and shape of tunnels. Of course cell phones are totally out of the question too. Shortwave radio behaves only a bit better.

Much larger distances can be achieved using low frequencies.

Cavers have observed that sometimes it is possible to receive  strong long and medium wave radio stations.

The Molephone designed by Bob Mackin in the ’70s was one of the first devices that enabled voice communications through rock. Unfortunately the schematics are not avaliable. This device used SSB on 87kHz. The antenna was a multiturn loop with about 1m diameter.

Since that time most devices use  87kHz USB (or DSB) to be compatible. The most popular are Heyphone and Systeme Nikola. Usually the power is in the order of 10W to keep the weight of the equipment and power sources low.

The Heyphone was designed by John Hey G3TDZ. Full documentation is avaliable so that anyone can build this device.

The Heyphone was used in the 2018 Tham Luang Nang Non Cave rescue operation in Thailand.

The Systeme Nicola was designed by  Graham Naylor. It is very popular in France. This device has many versions. The last version Mk3 uses DSP techniques. Documentation for the  Mk2 version:

Polish cavers also use this device, probably the Mk2 version. The picture below is from a video “Rescue operation in Niedźwiedzia Cave”.

At the begining multiturn loops (big coils) were used as antennas. The magnetic field from the transmitter coil could be detected by the receiver coil. Various sources state that voice communication at 150-180m distances are possible at power levels around 10W at 87kHz SSB. These antennas are still used for through-the-earth radiolocation to find the location of a transmitter in the cave (for cave mapping etc). 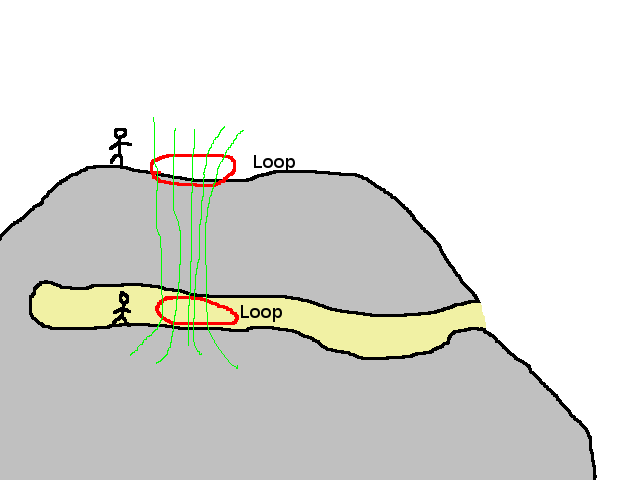 Experiments have shown that a ground dipole performs much better than the loop. With 10W power voice communication at 500m can be acieved (some sources claim 800m). 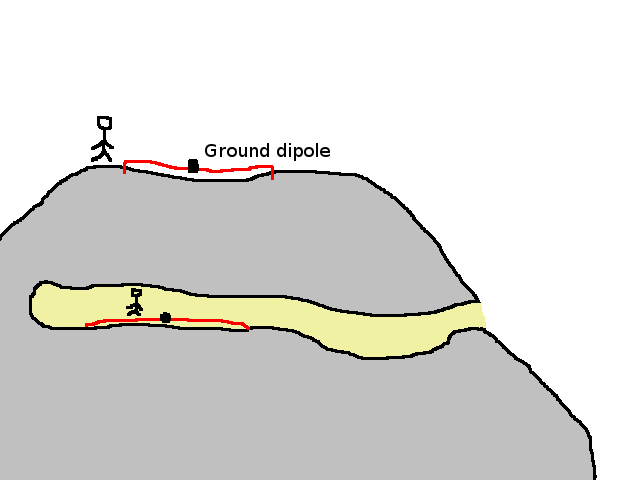 It is interesting that the antenna also works when the antenna ends aren’t grounded. In this case the connection can be made using “capacitance hats” from a few wires connected to the end. The connection is via capacitance to ground. Of course this degrades performance, but communication is possible.

Other means of communications in caves

Telephony using two wires, or one wire and earth return can be used.

According to tvn24.pl “On sunday a team started laying a cable which will be used for communications in the cave.”, so probably telephony will also be used in the Wielka Śnieżna Cave rescue effort.

During the 2018  Tham Luang Nang Non Cave rescue operation in Thailand VHF radios with mesh networking were used. Any radio can relay traffic to another radio. Of course this doesn’t work through rock, but can extend communications range in tunnels.

Professionals often use a leaky feeder in mines and tunnels:

Article about the technology used in the 2018 Thailand rescue operation https://www.wired.co.uk/article/thai-cave-rescue-boys-news-tech